How Content Helped This Radio Salesperson Close a Six-figure Deal

In sales it’s all about making the sale. Right?

Absolutely! But making the sale isn't easy. And these days, most sales reps tell me it’s getting even tougher out there. Why? Well for one reason, there's more competition than ever before—more people are fighting for the attention of the very same prospects. Also, it has become completely commonplace for prospects to do research on what they want, how they want it, and what they should expect, before they ever meet with a single salesperson. The seasoned sales pros reading this article are nodding their heads right now. They know this is exactly what’s going on.

So that’s the conflict.

The answer is in this story that I am going to share with you about how a radio sales rep recently used content to help close a six-figure deal. I've been asked not to share names, so for the purpose of this story, I'll refer to him as Pat and to his prospect as Acme Company.

Pat had been selling for a few years at a very good radio station in the market. Recognizing the importance of new business to his station at that time, Pat was highly focused on meeting some challenging new business goals. He was determined to prospect heavily but quickly learned that most of the valuable time he set aside for prospecting was being spent leaving messages on voicemail and sending out emails desperately hoping that someone would eventually respond. Pat finally decided that there had to be a better way. And he changed the plan.

It’s important to note that the station had recently started using content to market itself to potential advertisers and to position itself as a thought leader.

Knowing that, here are the 5 steps Pat took:

1. Decided on a specific category that was of interest and also a good fit with the station audience.

2. Assembled a list of about 100 prospects in the category and captured all of their email addresses. He had been working on some of these prospects for quite some time with no level of success.

3. Assembled three blog articles and one piece of premium content (in this case it was a checklist) that the station had published over the last six months and that he believed might be of interest to the decision makers that were in this category.

4. Wrote 3 emails that he planned to send to this targeted group in the following way:

6. Pat was most excited to see that one of the prospects noted in the comment box that he was extremely impressed with Pat’s approach and had found the information incredibly useful. He went further to say that he wanted Pat to call him on his direct line and would like to meet as soon as possible. Pat called and a meeting was set for the very next day.

It didn’t take long for Pat to discover that he had hooked a whale of a prospect! While they had never done any radio advertising in the past, they certainly had marketing dollars to spend on the right solution for their needs. This prospect moved quickly through the sales process and Pat continued to send his new prospect articles and information at just the right time. Every time the prospect had a question or concern, Pat was able to send an email and point the prospect to some published content that answered the question. It was clear to the prospect that Pat was a true expert and his station was a valuable resource.

Continuing to nurture this large prospect, Pat maximized his station’s lead Intelligence software, taking careful note of when his emails were read, when the articles were opened, and whether they shared the content with others in their company. These were important signs that things were heading in the right direction.

Pat also followed up with the other 19 prospects that downloaded the check list and secured an additional 10 appointments as a result of his diligence.  6 of those appointments were disappointing but 4 appeared to have greater potential.  His continued follow up and persistence eventually lead to 2 sales from this group putting him ahead of those around him working the phones.

You probably want to know how the story ended with the whale of the prospect, so here are the facts. They continued to move quickly and within about 30 days from their first meeting, they signed the contract on a 6 figure deal. This was a big win for the station. This company was a perfect fit for the station’s audience and Pat’s idea was clearly spot-on.

This was also a big win for Pat. Not only did he have a new client, but he also learned how to use content to attract leads, optimize the prospecting process and make the sales process more efficient and accountable.

This is a great story of success, and who knows… this could be your story too. 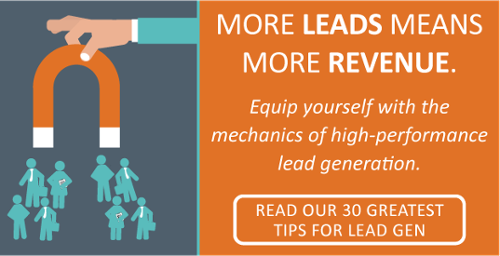