What CPA Firm Partners and Marketers Can Learn from IBM’s Watson (…and H&R Block!) I have a lot of admiration and respect for the new H&R Block “Power of Won” campaign featuring IBM’s Watson and spokesperson Jon Hamm. It’s brilliant on so many levels. By doing a deep dive on the campaign, managing partners, executive committees, and marketing teams at CPA firms (as well as other professional services) can learn a lot about marketing and communications done right.

First things first, you need to know who Watson is. You might remember it as the cognitive technology that thrashed a few Jeopardy champions a few years back. Since then, Watson has become a runaway anthropomorphic success for IBM, offering its capabilities to commerce, healthcare, financial services and a host of other industries. Now here’s simple exercise that can serve as the core of what I’d like you take away from this blog post.

Ready? All you need is your firm name and the name of one of your services like “business valuations” or “cybersecurity consulting.” Just fill in the blanks:

(Firm Name)’s (name of Service). Powered by Watson, for example,

That brings quite a different message to prospects rather than,

Am I right, or what?

Getting Schooled by H&R Block

There are several marketing insights and lessons for your firm that can be gleaned from the H&R Block/Watson campaign.

1. Draft off another firm’s brand.

When you think of Watson, you think of speed, computational power, expansive knowledge, and results delivered at cyber speed. To co-brand these capabilities with H&R Block’s tax planning and preparation is sheer genius. Effectively, H&R Block latched onto IBMs coattails and the IBM brand to make this a powerful marketing campaign.

The lesson here: look for opportunities to co-brand your firm–or even a niche practice at the firm–with other firms who can bring the power of their brand to helping you get more visibility, leads and new business. This doesn’t have to be a monumental strategy like that of H&R Block. It can be as simple as co-sponsoring and co-marketing a webinar with an industry trade association.

2. Seize an opportunity to find a meaningful point of differentiation for a commodity-like service.

Taxes + H&R Block. Ok, that’s been around forever and frankly, when it comes to tax prep, the difference between you, them and their competitors like Jackson Hewitt is negligible. But taxes + H&R Block + Watson?

In a single stroke, they managed to create an untouchable differentiation that with nurturing, can last for quite a few years. Sorry CPA firms, cobranding with Watson is now off the table for tax planning and compliance.

The lesson here: look to develop your brand and brand campaign around tangible, meaningful, hard to replicate differentiation. Spoiler alert: this is a very, very difficult task as most CPA firm and their partners want to brand around superlatives like “we’re dedicated professionals!!!” that become nothing more than background noise to clients and prospects.

3. Use a familiar spokesperson to create attention.

The use of a familiar spokesperson was brilliant, even though you don’t associate Jon Hamm or his Mad Men character with accounting. He was chosen from amongst a list of candidates because of his likeability and a number of other factors. A few years ago, when I was a CMO, our firm used a former NFL football coach familiar to everyone in our markets in a very successful brand campaign.

The lesson here: think spokesperson but research the ROI.

4. Shift the conversation away from benefits and attributes to perceptions.

In the past, when you looked at H&R Block’s commercials–or those from its competitors–they were all about getting a huge refund quickly, accompanied by a (disastrous) offer to give the taxpayer their refund at the time of filing. H&R managed to shift the conversation out of this sandbox into a whole new arena by promising a huge refund secured quickly by the most powerful and the most personable computer the planet.

The lesson here: branding works on perceptions and emotions, not benefits and attributes. Your branding campaign must touch the hearts and minds of clients and prospects, not just their checkbook.

5. Do market research to capture the perfect slogan.

“The Power of Won” wasn’t created by partners seated around a conference table. It was likely based on a ton of research and focus groups where attendees were asked this question: “What does it feel like when you find out that you’re getting a refund bigger than you expected?” Somewhere, somebody said something like, “I feel like I beat the IRS.” Then, a clever research and ad team went “EUREKA!!!” and went down a path that led them to a very simple, yet powerful, understandable and meaningful slogan.

The lesson here: invest in market research to find nuggets of insight that can be used to build your campaign.

6. You don’t have to be heavy handed to market accounting services.

Whenever I see a Big 4 / 10 / 20 television commercial, I always feel depressed. It’s usually a bunch of suits talking about a disaster that their team can solve. The H&R Block / Watson spot–even through it's directed to the individual taxpayer–takes a very different approach. It’s a message about applying power to solve a problem without all the drama you see in other commercials... or on the hats of golfers.

The lesson here: even though accounting and compliance is serious work, you don’t have to portend a coming apocalypse to be effective.

This campaign didn’t do a soft launch. It went just about as big as you can possibly get with a national Super Bowl ad. The commitment was made to fund the launch in a big way, but also consider the fact that between striking the co-branding deal, doing the conceptual work, and executing on the creative, this was months and months in the works.

H&R Block just didn’t do television–they squeezed their investment in as many ways as they could possibly think of and there’s probably more to come. This campaign is on both the H&R block and IBM websites. It’s being relentlessly used on Facebook and Twitter. And look at the metrics on H&R’s You Tube channel–their Super Bowl ad has now been viewed about 1.3 million times.

The lesson here: if you’re going to do a branding campaign, figure out how to distribute, sustain, and fund the campaign’s reach and frequency using a combination of traditional and digital media channels.

The Power of Branding for Your CPA, Consulting or Other Professional Services Firm

The message that really resonated with me from this campaign is all about the power of smart branding.

Even though so much attention is being focused on digital, lead generation, SEO, SEM, and other marketing tactics, there’s still a need for your firm to do insightful and clever branding that uses print and broadcast advertising in conjunction with other media channels.

But as clever and insightful as your brand concept might be, without an appropriate level of funding–like the media plan currently being executed by H&R Block–all you’ll have in hand is a clever concept.

You need to crack open wallets to make your brand visible.

And while H&R Block has beaten you to the punch when it comes to personal tax planning and compliance, there’s still plenty of room to co-brand a service with Watson and beat your competitors to the punch. How much more market visibility and awareness could your firm’s consulting, compliance, or planning services realize with a “powered by Watson” association?

LeadG2’s Professional Services Team specializes in online marketing for CPA, consulting, recruiting, staffing, and other professional services firms. Contact us here or call Dean Moothart at (407) 913-7091 to talk about how you can get more visibility, leads, and new business for your firm or niche practice. 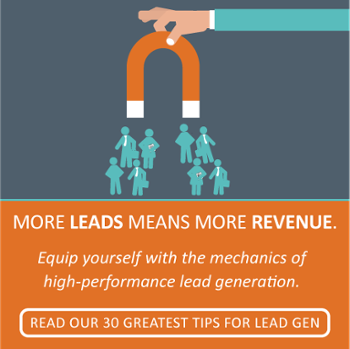